its an 800. the mounts are welded to the frame. i'll send a better pic when i can.
Top 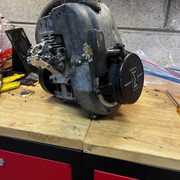 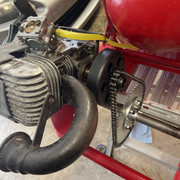 More pictures. Starting to think it’s not an mc91. Could be wrong though.
Top

Seems fixed. still unsure about it being a 49. its what i thouht it was for a while but i looked at the IPLs and there were some pretty major differing factors in the shape of the block and outlines of some gaskets.

did some mild research, i think it is a 49. found a 49 block on ebay thats identical to mine. maybe the one in the IPLs was of a different variation or had some minor misprints.
<img src="https://encrypted-tbn0.gstatic.com/imag ... p;usqp=CAU" alt="VINTAGE RACING GO KART NOS McCULLOCH MC49 BLOCK ENGINE CART MINIBIKE PART | eBay"/>
Top

Now that i know what it actually is, how can i make more power?
Top

Buy a 91 series engine and sell the 49'er would be cheaper in the long run.
Top
Post Reply
17 posts