If you've been coming to THE BIG ONE over the years you know that there is a gentlemen named Terry Sullivan from Georgia who is a annual attendent that always brings up some of the nicest Clinton powered karts you will see anywhere. Well this year was no different however Terry brought up something Clinton powered but with a bit of a twist to it.

What Terry did was convert a Clinton boat engine to a kart engine.
At this point I'll let Terry do the talking so here is his description of his handiwork.

This started with a used Clinton K-751 boat motor powerhead from ebay.
The big problem was the stubby crankshaft, like in the picture below.
I tig welded an extension on it that I took from an old A490 crank.
I know that is kinda risky, so I fabricated a cage around the crank and clutch, just in case.
The boat engines have adjustable spark timing, so I set it at maximum advance and tightened the adjustment.
The only other problem was finding a suitable mount. I used a piece of 6x6 extruded 90 degree aluminum.
An E65 manifold bolts right up and away we go!
Only did a few laps at TBO to see how it ran. Once I got the carb adjusted, it felt really strong.
I'm thinking it would run with an early Mac, like an MC-10?

Here is some photos of Terry's rig. 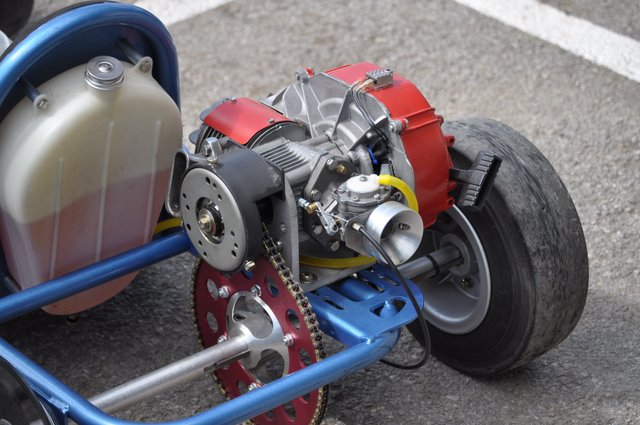 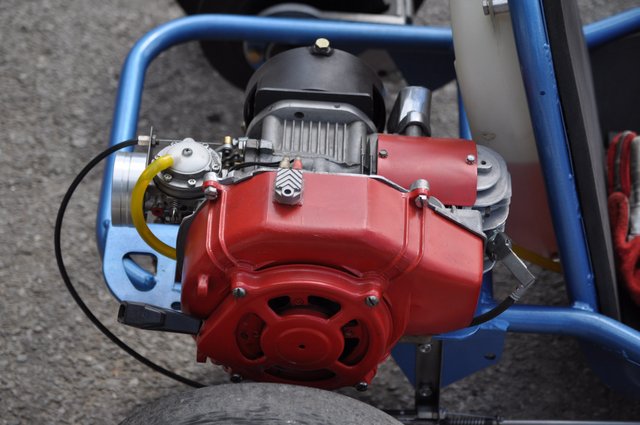 Thanks for the article Bob!
Most of my Clinton buddies were absent from TBO this year, so I couldn't see how this engine compared.
Like they say, there is no replacement for displacement!
Here is a clip of the crank that had to be modified. Typical boat engine design with a short PTO that plugs into the lower end unit to drive a prop. The trick is getting the welded crank extension to run true with the rest of the crank.
I used a lathe to modify both ends to be joined and it came out fairy well.
AFTER I was done, Dennis Turk revealed the trick - start with an extension that is a larger diameter than the desired PTO.
Once welded, you can then turn the extension to the right dimension, eliminating any wobble.
BTW - Clinton made another engine that is bigger yet - like 10 cubic inches! I wish I could find one of those.

Terry, Bob, what's the guy's name out in Cali, the Simplex guru? He has a monster Clinton outboard on a Simplex kart. I saw it at Bakersfield in '11 or '12. I seem to remember he even had an expansion chamber on the beast. It was respectably fast-and noisy. I had Bakersfield pix, but lost all of them when the old computed crashed. OH, YEAH!! TOM THORIN! Ted
Top

Yep, Tom.
I have never talked to him.
I think he has the real Go Kart version - not a boat engine - Clinton model 502
I have one of those, but it is not modified.
Very similar to the boat engine. Picture below.

No, Terry, it wasn't a kart Clinton. It was an outboard, over 7 cubes. A monster. I've seen the 502's before. I used to have a 7" outboard Clinton I converted in Pop's shop. It ran O.K., but Thorin's was way faster. Ted
Top

Looks like that 502 has a removable head. Love the exhaust headers.

Both of the big ones have removable heads.
If I was braver, I'd think about converting one to loop scavenging, or maybe just 5 porting it.
Top

That weird outboard I converted was bigger than 7 cubes, but had integral head, and ports like an E-65. It's been so long that I don't remember what we did with the PTO end of the crank. I ran it a few weekends on the dead axle Bug Custom, and someone bought it from me. I remember having a heck of a time making a mount. This was over 61 years ago, probably almost 62. I was all of 15 years old, and my memory of those early days is not good. Ted
Top
Post Reply
8 posts • Page 1 of 1