Finally got the mighty Clinton bolted up. Had a few problems with the throttle linkage hook up so a new cable fastener at the carb and a new bracket at the manifold had to be fabricated. Once the cable issues were out of the way everything went very smoothly as far as the actual mounting went. Mount offers plenty of adjustment, seems real strong, and the chain lined up and rolled very nicely. 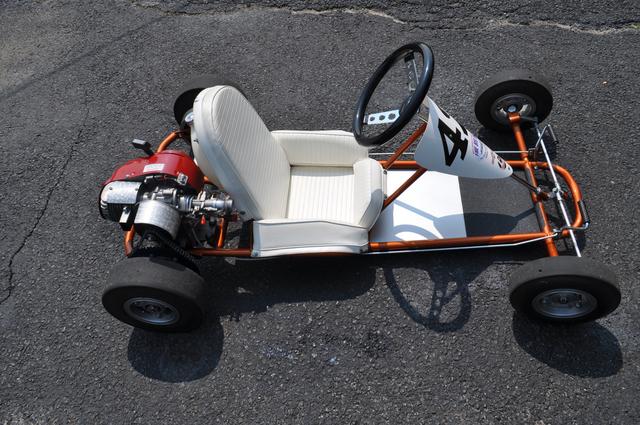 With the motor mounted up its off Avon N.Y. for some testing. Its always good to see Scott and Sam along with the others who attended plus I love the track layout and the sun was actually shining for a change. 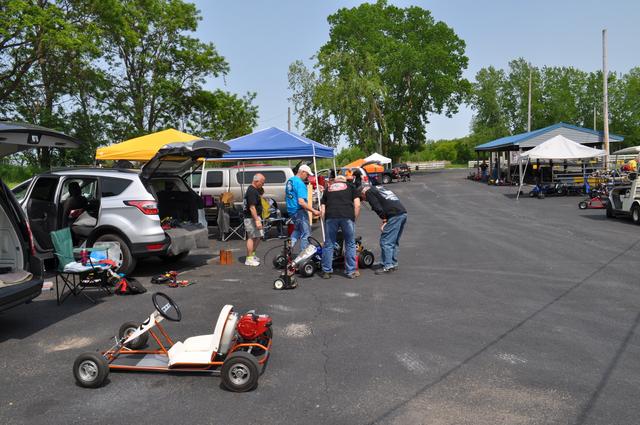 Had a minor issue with the initial morning start up because somehow the plastic carb top had developed a crack and I had a very small gas leak but that was easily fixed with a new carb top. Once the top was replaced she fired up on the 3rd pull of the recoil and she idled very nicely.

Once out on the track I took it real easy because I had quite a few unknowns I was testing. If you read the Clinton build stories you know that not only was the motor new but the motor mounting system, the carb diaphragms and gaskets, and the home brew clutch were all on there maiden run so anything could happen.

The carb was set slightly on the rich side and out of the pits the first thing I noticed was that the kart was actually moving forward and that told me the home brew clutch was working and it was working very well for that matter. The engagement speed of the clutch seemed to be nicely matched to the Clintons power band and the clutch seemed very smooth and consistent. There were zero chain issues either and that told me the engine mounting system was sound also.

Now satisfied that the clutch was in working order and the motor wasn't going to fall off it was time to play with the carb and lean her down, then richen her back up then, do the same routine a few times to check if I had a good consistent set-up and that's exactly what I had. From the test I made I would say the $2.00 carb kits worked.

The maiden voyage was over and all went well so back at my pits it was time for a visual inspection and a go through of all of the fasteners to see if anything loosened up. All is good so back out for test session two.

For session two, the motor fired up nicely, kart pulled out of the pits as it should so I figured I might as well get a little aggressive and see what this Clinton has got. After a lap to get some heat in her it was time to lean her down a bit and to my surprise she has very good performance for what it is. Motor pulled nicely out of the turns and has some good straightaway speed even on the long Avon straight. Bottom line is I'm happy with the whole package....very happy.

If everything is good the only way it can turn is to bad....As I'm running along and starting to get visions of waving at Chris Marchand as I drive around him I heard a funny tinging noise. At first I thought it was a stone or something laying on the floorpan until I heard it again and I realized something might be seriously wrong and I better get this thing shut down.

Once off the track I noticed that the paint was chipped on the fan shroud and there were some dents in it also. I quick peek through the inner side cover inspection hole revealed some chipping on the flywheel so I was done until further inspections could be made. Upon removal of the fan shroud it revealed that a flywheel fin had broken off. 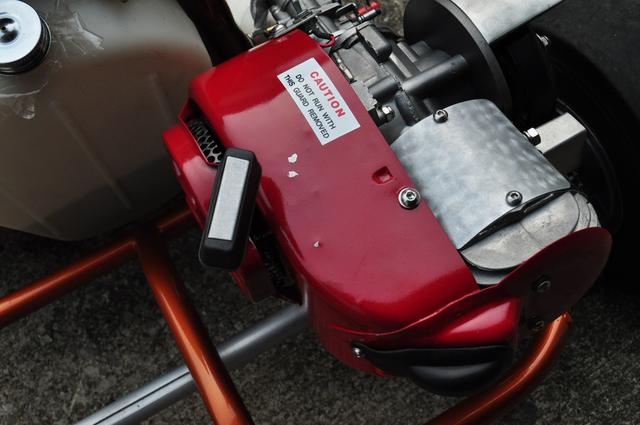 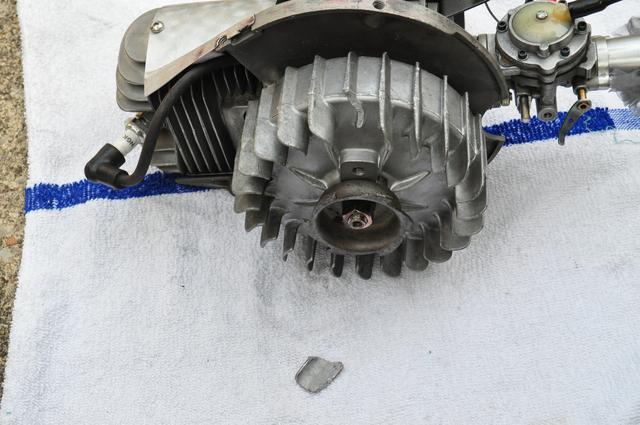 Overall, This was a very enjoyable build and I'm very happy with the results of all of the components. A new flywheel and some paint and I'll be ready for TBO.

Here are the links to the build steps.

Special Thanks again to Terry Sullivan and John McCorvey for all of their help in this project.

Bobby, that is beautiful! I'm glad it's working out well. I remember the aluminum Clinton flywheels weren't always reliable. I had fins come off the one on my converted outboard back in the day. That engine/clutch is in the pioneer spirit. If they don't make what you need, make it yourself! Ted
Top

Bob,
Glad it was just a broken fin. Looks like you have a great running Clinton. Can't wait For TBO so all the Clintons can run together
Roger
Top

A few pics of three guys battling with true vintage karts and engines.
Back to 1961

So cool to watch these guys.
Too bad Bob had to leave early and broke a fin or he would have been in there with the best of them.

Yup, that is the Clinton out front!!!
Top

A chink in the armor goes a long way.

Step one.....get inside their head.

Too bad you couldn't make it up Chris.

Looks like I will need to get the old Blackstone with Clinton fired up for the Big One. See you all there.
Later Mike
Top

Well, got the mighty Clinton back together after the flywheel mishap so this past weekend I thought I'd make another run to Avon for some more testing.

Could not make the first official day [Friday] so I got there early Saturday morning.

I fired the motor up Friday night and she started one pull, idled nicely and sounded nice and crisp. Come Saturday morning after unloading and fueling the kart I went to start her for the first practice session and she was not having anything to do with me. Pulled the plug, looked good and had spark and Jim Donovan said she was puking a little fuel from the exhaust horn so I changed out to a new spark plug and I checked for spark again and proceeded to try again. This time she started but the carb seemed out of tune so I gave her a couple of twists and she seemed to respond.

They ran a short practice so as I was putting on my helmet Jim pushed the kart to the grid and when I went to start her I was met with a engine that started and idled but just didn't sound right. Screw it, I hopped in thinking maybe once I get some heat in her I'd be able to get the carb dialed in alittle better but she wouldn't even turn enough rpm's to get the clutch to engage so I waved off even trying to go out on the track.

Back at the pits I reviewed everything that I had done since the last time I ran her before the flywheel fin failure and the only things I could think of was that I doubled up the stocking I put over the velocity stack and I removed the flywheel. If the flywheel keyed sheared I was dead in the water so I went to the stocking on the carb and went down to a single layer and I also changed the plug again for good measure. Couple yanks on the cord and she fired up and sounded good. Problem solved right, WRONG !

Ran the 2nd. heat and brought her home 3rd. behind 2 strong running 5 port little Benders. Can you say "Shit Eating Grin Happy" ? Time for the 3rd. heat, had to start in the back because I missed the first heat so I came home 5th. but I was in the hunt with one of those 5 port Benders and a MC 1. Yep, still grinning.

Moral of the story, the mighty Clinton is dialed in and waiting for TBO.

P.S. second round on the CheapO carb kits, home brew clutch, and offset mount and they worked perfectly.